Hello hello hello! How have you all  been keeping?
Life has been pretty busy (when is it not, amiright?!) and the days just seem to be speading past at lightning speed. But its all good!
I have done zero outfit photos of late, mostly because Hubby has been working so so much and by the time he gets back i am literally in joggers of pj’s with make up wiped off and my full chill mode is on.
So yesterday i grabbed the poor man as soon as he got in to just capture literally what i had on  (which was nothing special) whilst our salmon was cooking in the oven for tea. 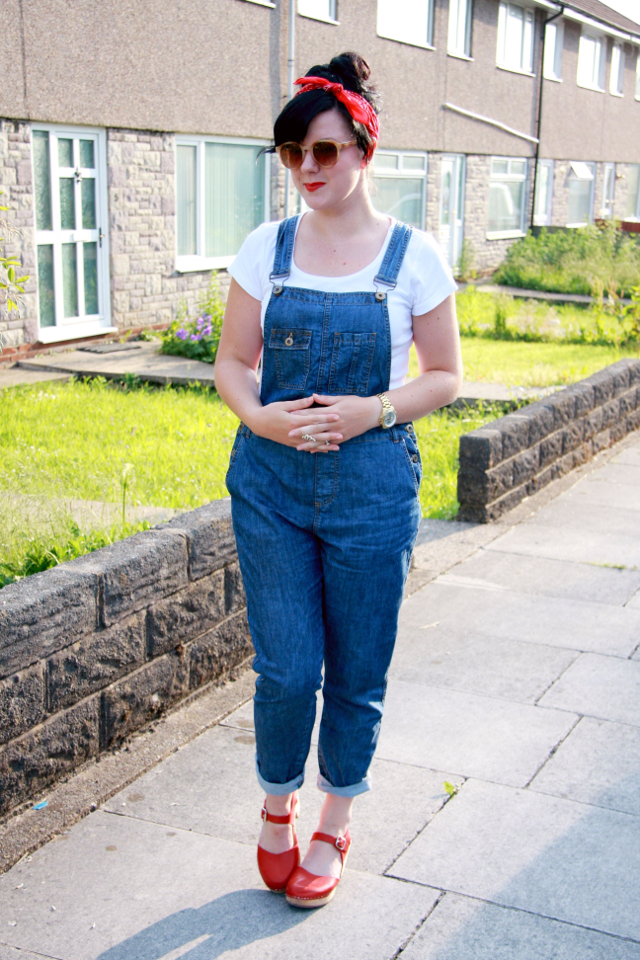 Its a super casual outfit as i have been super casual on my days off lately, mostly jeans and shirts. Then these bad boys arrived from Asos and i fell in love!! I first spied these on the lovely Jemma and stalked her on IG and added them to my basket on Asos multiple times, then last week they were reduced and i finally gave in and bought them for myself. I was a bit wary of dungarees on my pear shape body, but i threw caution to the wind and just went for it. And can i just say, they are so damn comfy! Like, do not want to wear anything else ever again, comfy… 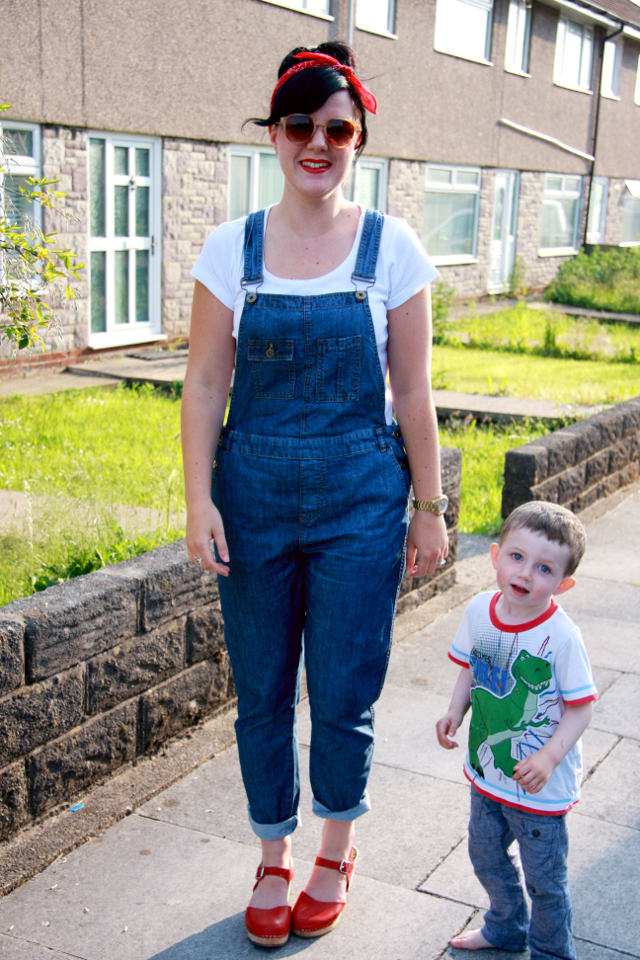 This little guy came out for a nosey (note: i do normally out shoes on my children, i promise!;-) and decided he wanted to get in on the action, which is a regular occurrence.  After a few weeks of tantrums and strops and generally being hard work, he has been a little darling lately. We sit, we play, we cuddle, we read books. Its just the most heart warming, lovely time. I love having his company at the moment (but with a toddler, that could so change at any time!) He cracks me up! Even at 6.15 in the morning when hes stroking my face and saying in his cute little voice ” Mummy, Neo hungey” i just can’t resist scooping him up and squeezing him with cuddles,heehee. 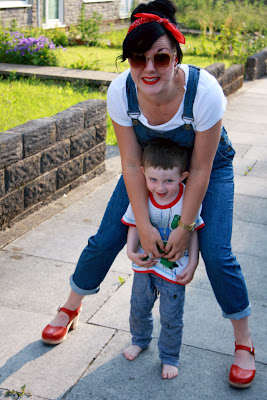 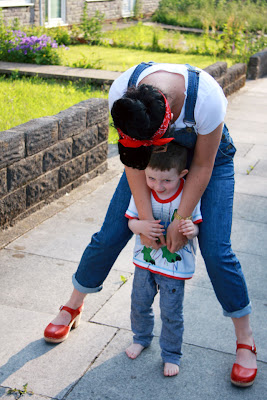 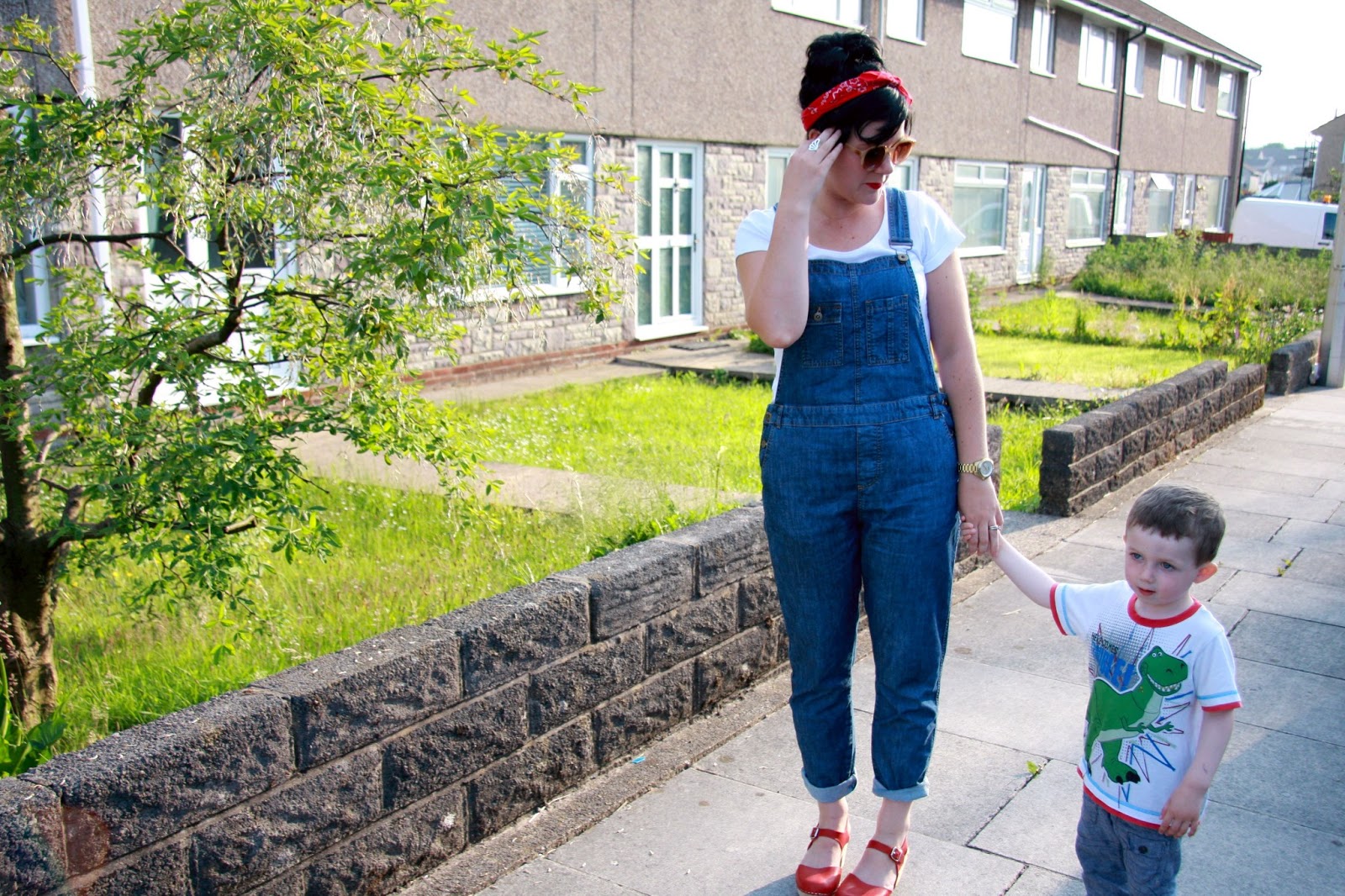 Speaking of the little guy, i visited his school this morning. You guys, how is this happening!! He starts full time school on September 4th!! I mean how can this be? How is my son old enough for school?!!! Who stole the last (nearly) 3 years?! No fair!!
I got a bit excited, the school is wonderful and i think he will love it too.. fingers crossed. He has a little uniform and everything, its the cutest! 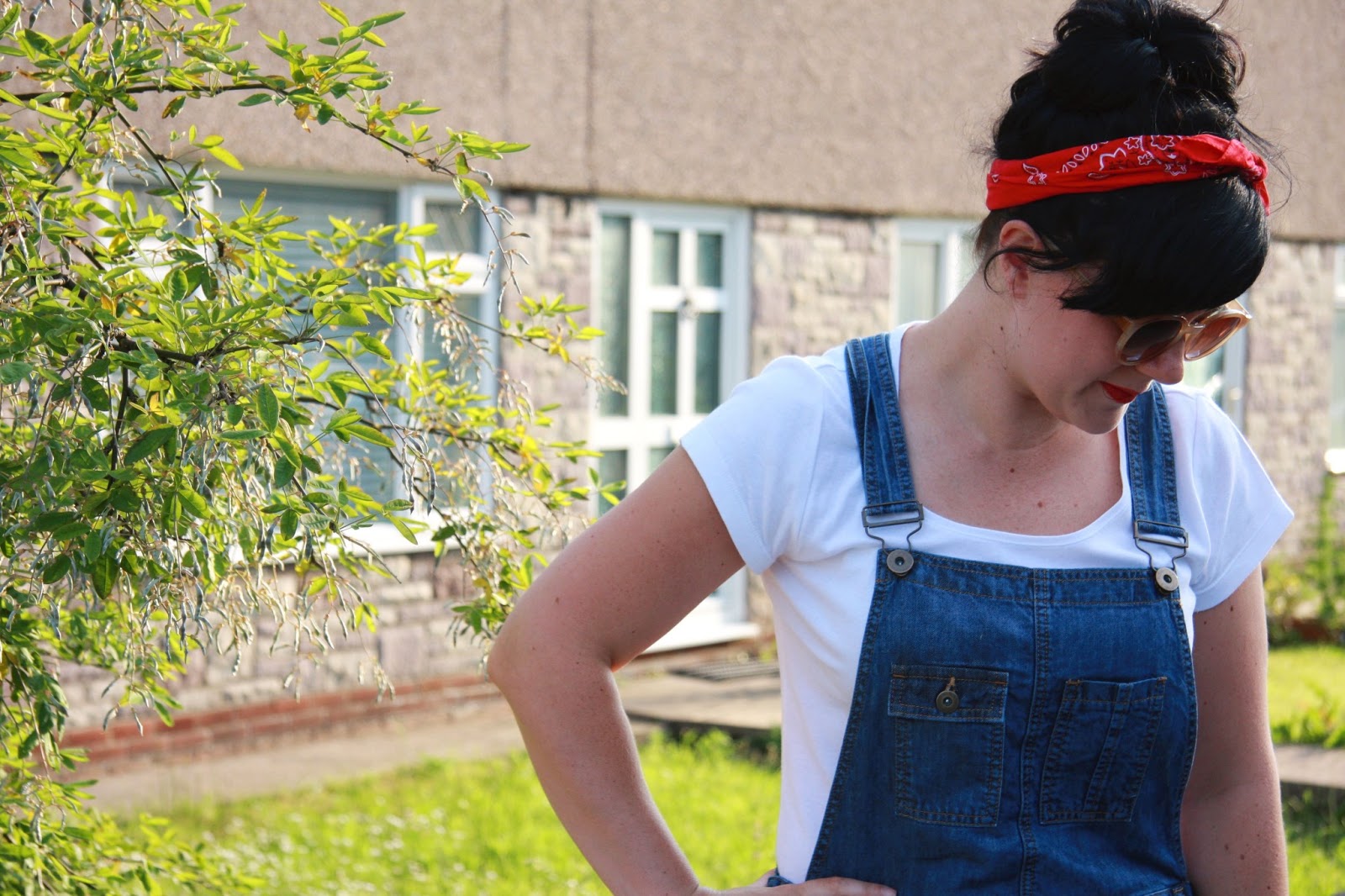 Anyway moving back to the outfit, have you guys tried dungarees? Do you love or loathe? I felt a bit like a country hick in this get up, but i totally dig that! And the bandanna was a pound from Ebay (the wonder that is) and is really helping with this annoying fringe (bangs) growing out period, which seems to be taking forever. I honestly thought it would be a lot quicker, knowing how fast my hair normally grows. Obviously by hair is a defiant biatch and does the opposite of what i actually want it would appear. Speaking of hair, i get really annoyed with it down at the moment, like it irritates me to the point where i want to cut it all off, do you ever feel like this my fellow long haired lovelies? Ever get irritated with it and want to chop it off? 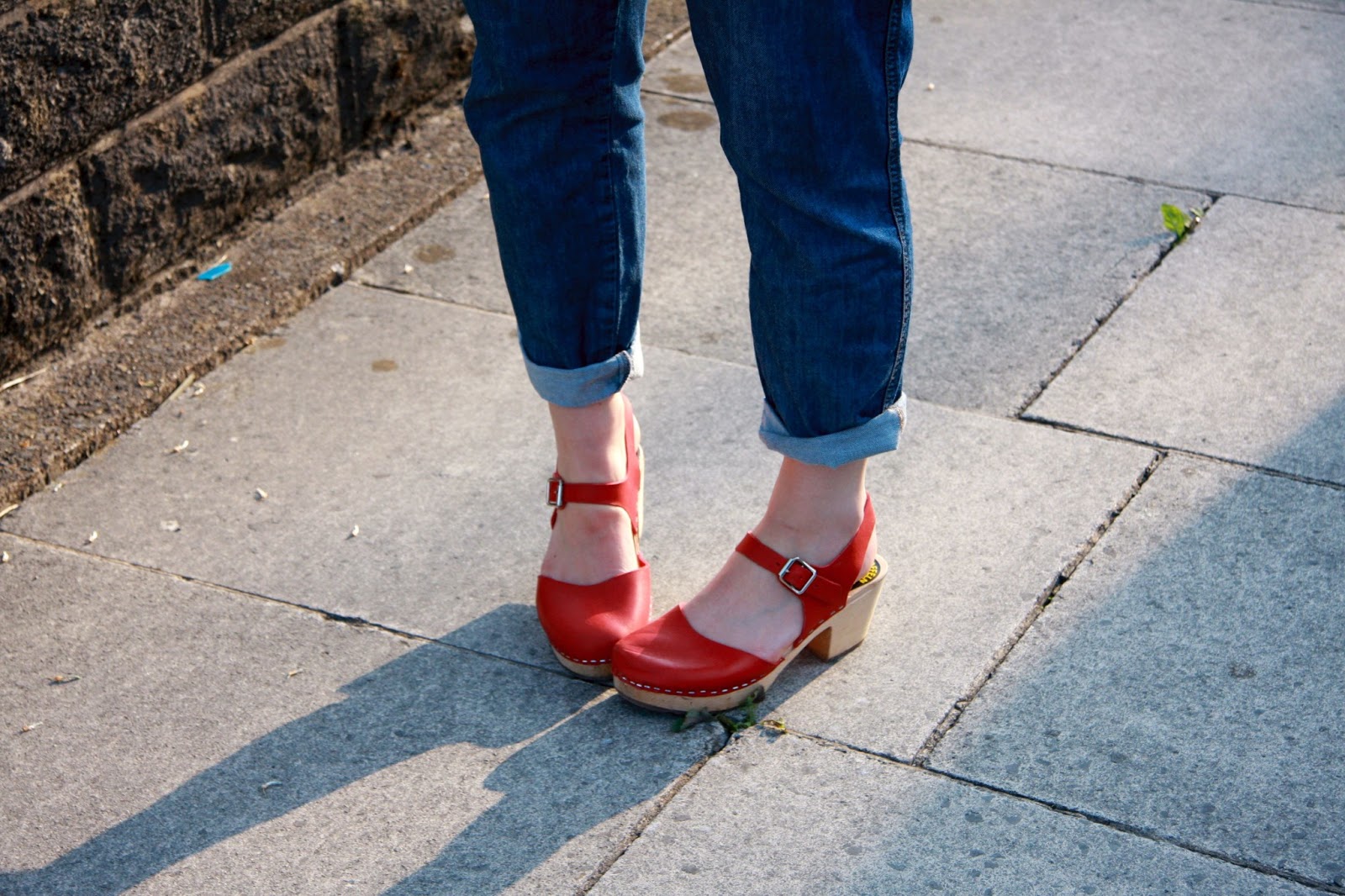 So its very nearly the weekend folks, bring it on i say! Hope you have a fantastic one!! 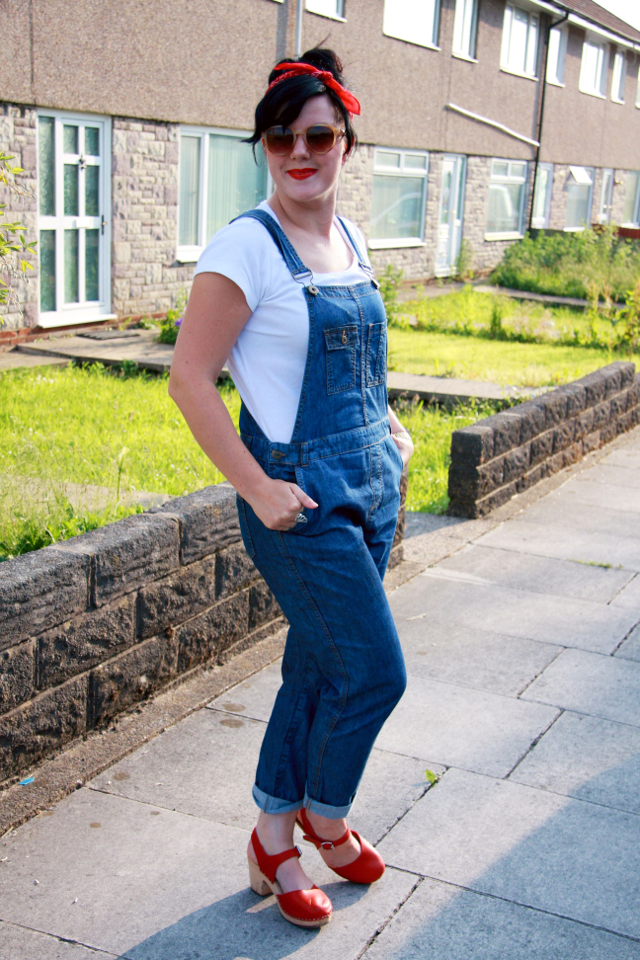